This year’s North Carolina State Fair, now nearly a month past, attracted almost a million folks to the fairgrounds in Raleigh. Some came for the gardens or the old-time cheer, some came for the rides, and some even came for the cows. But most fair goers shared a common experience, or rather, a common meal.

The food at the state fair is a collision of NC classics and new (usually deep-fried) creations, a delicious and relatively affordable dining experience for all. My friends and I entered 2018 fair with one main goal: to eat some local, delicious deep-fried goodness. Join me on this tasty journey through our local history and culture, as I review the North Carolina State Fair’s most iconic foods and hunt for that “Gotta Be NC” flavor.

I’ve had many deep fried Oreos in my day, and in this time I’ve observed a few quality-determining factors: the balance of the dough, cookie, icing, and powdered sugar; the flavor and texture of the dough; and the quantity of powdered sugar. This dough was, well, too doughy! It was more than twice the size of the actual Oreo and overpowered the other flavors. The powdered sugar and icing were lacking, but the Oreo cookie’s perfect sogginess and the satisfying balance of dense dough and fluffy sugar saved this dish from complete culinary desolation, raising my rating to a (mediocre) five out of ten.

When I tried a cinnamon candy apple for the first time last year, it wasn’t my lack of appreciation for its two major ingredients that disappointed me, but the fact that it got stuck in my teeth—and hair! As a result, I was hesitant to try this fair’s apple offerings, but the cutesy allure of one stand caught my eye. I was blown away by the freshness and lack of grittiness of this bona fide North Carolina grown apple, whose bitter skin perfectly complemented the sweet candy. The apple was juicy, perfectly sweet, and perfectly priced, ringing in at only two dollars.  This apple earns a nine out of ten for its delicious taste and well-balanced textures. I can’t wait to eat one next year! 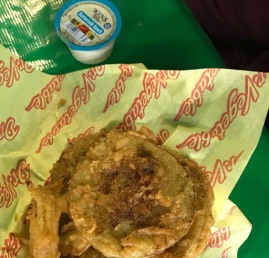 A delicacy rarely recreated well north of the Mason-Dixon, fried green tomatoes are one of my favorite foods, and I was excited (though unsurprised) to see them being sold at many of the fair’s booths. Alas, I was mostly disappointed by these particular tomatoes’ lack of flavor and their unpleasant texture. The tomatoes were far too ripe to have that classic sourness—almost as if they were straight off a lackluster deli sandwich. The thin, flavorless crust didn’t help, and their blandness even coerced me, a self-proclaimed health nut, to douse them in salt. These disappointing tomatoes were offset by slightly less disappointing ranch, but ultimately, while I appreciate the effort to incorporate vegetables into the State Fair diet, this is not the way to do it. I give these pathetic tomatoes a four out of ten for shaking me to my Tar Heel core.

I love corn on the cob. Something about plowing through the kernels is animalistic, and the fibers between my teeth always trick me into thinking this food is healthier than the calorie count suggests. The pictures inundating my Instagram feed of State Fair corn, char-roasted, dripping in butter and covered in seasoning, had tempted me for a week before I went to the fair. When I finally found corn that seemed high enough quality to buy after a thorough search for kernelled perfection, I ate it with ferocious, blissful speed. Even with just butter (I forgot to add seasoning in my feverish rush), this sweet, salty, and filling snack satisfied my taste buds and my appetite for hours. I give this corn an eight out of ten, and I highly recommend that your next state fair experience includes a freshly shucked treat.

Although I’m not a pickle aficionado, the intrigue of deep fried pickles compelled me to invest in a seven dollar container from a Mount Airy-based barbecue booth by the lake. To my surprise, this exotic food was worth its cost. The crisp cucumber, sour vinegar, crunchy crust and overall pleasant saltiness made for a perfectly balanced evening snack, and despite my love of ranch I didn’t even consider using it to add flavor. This dish will definitely be on my state fair feast list next year, and though my friends’ dislike of it serve warning that it is an acquired taste, I give these fried pickles an eight-and-a-half out of ten.

After eating the fried pickles, which have a wicked aftertaste, I was craving something cheap and sweet to cleanse my palate before I went home. A chocolate-covered frozen banana with sprinkles did just the trick. Ringing in at a mere four dollars, this banana was sweet, cold, and super indulgent, a relatively healthy snack that fulfilled my craving for dessert. I give this banana a nine out of ten, bringing my “fruitful” culinary journey through the NC State Fair to a stupendous (and stuffed!) end.