When one thinks of Cary High teacher Mr. Ashburn and his passions, sociology and societal issues may come to mind. However, he also has a proclivity for cooking! Mr. Ashburn has had a decades-long career in the food industry, from waiting tables in Raleigh to helping start a restaurant in downtown Raleigh, and even cooking at the North Carolina Art Museum for the past ten years! I sat down with him, listening as he chronicled his culinary journey and told of the lessons he’s learned along the way. He even gave his two cents on the best restaurants in the Triangle, which range from fine dining to fast-and-easy quick service food.

Q: From start to finish, recount to me your career in the food industry.

A: I had to take summer school classes at NCSU because I was a double major, so I needed a night job. I got a job waiting tables at O’Charley’s in Raleigh (which is now a Chick-Fil-A). One day, a cook didn’t show up—I was kind of a terrible waiter; I didn’t like it, it was too much for me to handle—and I was put in the kitchen. I learned a trick early on: I’d cook two orders every time I got one, anticipating what I’d have to cook later. I’d have my food ready quickly, and everyone thought I was a really good cook. Since no one was yelling at me in the kitchen, I begged my boss to let me stay there, and he did.

I cooked through college, during summers, and when I graduated, I moved down to Charleston. I got a job at a restaurant called The Mustard Seed, and this great classically-trained chef took me under his wing and trained me. I was teaching middle school then, and he’d let me work at the restaurant during the summer, when it was busiest. O’Charley’s taught me the fast-paced nature of a kitchen, but The Mustard Seed taught me how to cook. He taught me how to make soups, stocks, sauces, and flavors, and how to properly season food. I learned how amazing an extra pinch of salt or an extra pinch of lime can be for a dish. It just really does things. The Mustard Seed taught me the art of cooking.

Anyways, I moved back to Raleigh and worked a few odd jobs, like one at a pizza place. I had stopped teaching and was doing real estate. Then one day, I met a guy who told me he was starting a restaurant in Puerto Rico, and needed one extra person to help. He was a chef (and had been for 30 years). He and his wife sold everything, and the three of us, along with another guy, moved down to Puerto Rico—I actually have our first menu framed on the wall in my classroom. I worked there for a year and a half, and it was really hard. There were ninety-six-hour work weeks; six sixteen-hour workdays in a row. I slept on an air mattress, on a concrete floor, and lived out of a suitcase, yet it was so freeing. It was such a different life. We’d forge for our food, and had fisherman give us some of their catch for the day. We had a printed menu with our basics, and a chalkboard menu with whatever we could find that day. 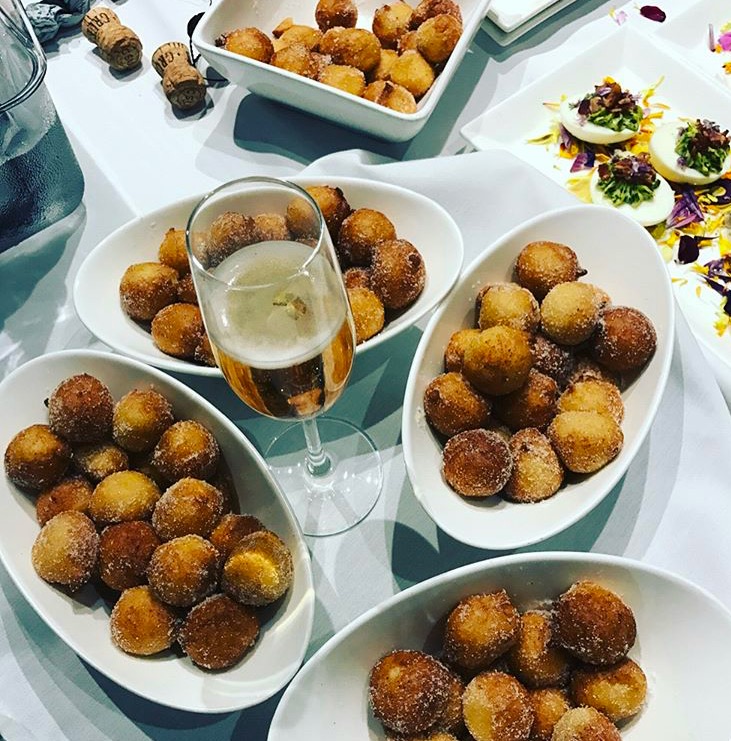 Our restaurant became pretty popular. Food & Wine Magazine came once, and we started getting a lot of publicity. Yet, I decided that I didn’t want to cook for a living. Unfortunately, it was kinda like a bad relationship that I couldn’t get out of. However, my relationship with food has gotten better, and for the past ten years I’ve been cooking at the North Carolina Museum of Art. I help the chef, with catering and whatnot, and during the summer, I get to cook for the bands performing in the concert series. And that’s pretty cool.

Now, I just appreciate my skill set because I can cook for family and friends, and I can cook for the community and bring people together. I do a lot of cooking events in downtown Raleigh, and it feels like I’m serving my community. One thing I love to do is to get issue-based “social entrepreneurs,” from around Raleigh and cook dinner for them. Then we sit and try to dream up ways we can solve issues around the community. Right now, we’re trying to see what we can do about more affordable housing downtown.

Q: Did you experience any “culture shock” while cooking in Puerto Rico, a place with a distinct culinary identity that isn’t always recognized in the contiguous United States?

A: One of the things I noticed was that the people in Puerto Rico didn’t like spice that much. They always thought that contiguous American cuisine was overspiced and oversalted. But that’s all, food-wise.

Outside of that, one thing I noticed was the extreme loyalty of my colleagues. There was one night where I walked out of the restaurant to hug some friends, and I guess I looked super disheveled, because a tourist thought I was harassing them. He pushed me to the ground, but the dishwasher who worked with us (who possibly had some questionable connections on the island) took him on a walk down the boardwalk, as far as the eye could see. When they came back, the tourist immediately apologized, and told me when his plane was leaving the next day. I thought it was a silly mistake, but the dishwasher thought staying on the island was a threat to my safety.

Q: Are there any elements or lessons from your time in the culinary industry that you’ve applied to teaching?

A: Absolutely! My nature is not to be detail-oriented; but as a cook, you need to have an extremely detailed, logical, and time-efficient plan, and learning how to plan well has really helped me in all aspects of life. I learned to figure out what needs to get done when, and cooking has really helped think about teaching in a strategic way that I never would have otherwise.

Q: Finally, simply share a funny/interesting story from your time in the culinary industry.

A: We’d do a lot of stupid pranks, I remember. One time, [my friends and I] stole a new guy’s knife (he was kind of a punk). We put it in a plastic container, which we filled with water and then stuffed into a large chest freezer. And it froze like Excalibur. We’d also lock people in freezers and put salt in people’s drinks. It was all really childish.

Q: As a connoisseur of all things culinary, are there any restaurants in the Triangle you recommend as must-visits?

A: Oh yeah! A restaurant called J. Betski’s. Even though I’m not a huge fan of German cuisine (it’s actually one of my least favorites), I just love that restaurant. The chef there is a-ma-zing! I’m also a big fan of Bida Manda and Brewery Bhavana which are both Southeast Asian restaurants (which happens to be my favorite cuisine). I think some of the best food I’ve had in Raleigh is from a restaurant called Crawford & Sons. In terms of lower-end food, I love Oakwood Pizza and Taqueria del Toro.