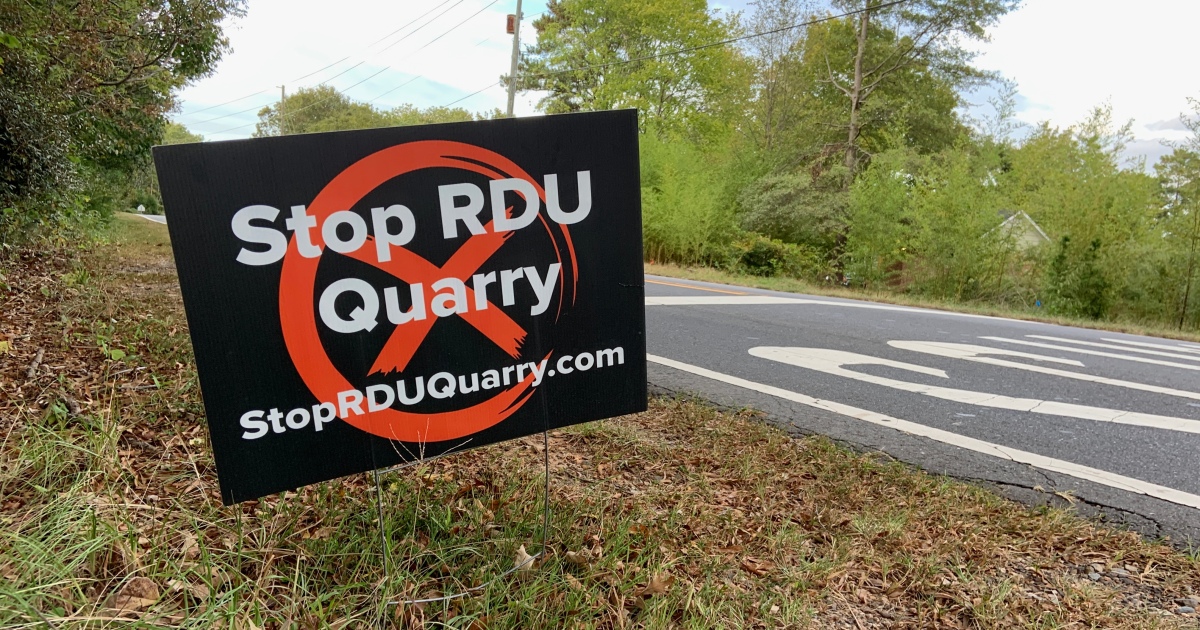 The melting of the polar ice caps. The burning of the Amazon rainforest. Thousands of species going extinct annually. If you’re anything like me, these issues produce visceral feelings of hopelessness, sorrow, and insignificance. As high school students in North Carolina, what CAN we do about global climate change? Using metal straws, reducing waste, or conserving power are all important actions, sure, but in the scheme of things, these actions mean very little. Research has shown that over 66% of man-made emissions are directly caused by companies rather than consumers. Recently, Wake County approved one of these companies to begin a massive new development over public lands, and this issue is something each of us can play a direct role in stopping.

In March of this year, The RDU airport authority (a governmental organization) approved a lease allowing Wake Stone Corporation to develop a quarry on 105 acres of public land, as well as designate an additional 506 acres for commercial use. Currently, this heavily forested land is adjacent to William B. Umstead State Park and is home to an unknown multitude of plants and animals. Once the quarry is built, these thousands or even millions of living creatures will be either killed or displaced. Not only is this morally despicable, science shows us how harmful this could truly be. Each year, 611 acres of trees produce enough oxygen to sustain almost 11,000 people and remove almost 1,600 tons or 3,200,000 pounds of carbon dioxide from the atmosphere. Further, tree root systems are absolutely essential to maintaining water quality throughout our aquifers and watersheds (both of which directly feed into our water supply).

Not only is this deal morally compromising and environmentally damning, a Wake County Court Judge ruled that it failed to follow federal regulations and NC state law regarding approval for how the deal plans to use the land. The main legal problem with the RDU quarry deal is that the land was previously designated for “aeronautical use” and before this land can be repurposed (such as for a quarry), the FAA needs to approve a “release” of the land as well as disseminate a Federal Register Notice. Despite the fact that neither of these steps were followed, Wake County Stone is continuing exploratory drilling in the area.

Debra Laefer is an NYU professor of Civil and Urban Engineering. In 2003, she conducted research in Fountain, North Carolina near a quarry of similar size to the proposed RDU quarry. She found that a quarry near a residential area can cause millions in structural damage to houses over time. The RDU quarry would be significantly closer to houses than the Fountain, NC quarry ever was. The stated purpose of this quarry deal is to help fund a 4 billion dollar infrastructure plan. It’s worth noting that previous to the RDU quarry deal being signed, The Conservation Fund offered a 6.4 million dollar lump-sum payment for the land, which then would’ve become a part of an expanded Umstead park. This lump sum is not any less money than RDU may receive from the rock quarry if you factor in losses from property damage caused by the quarry.

What all this means is that the deal for the RDU quarry is morally reprehensible as it will lead to unnecessary death and suffering of wildlife, environmentally detrimental towards air and water quality, legally flawed, and was chosen over a deal that is significantly better for our environment. However, hope is not lost, there are still many steps each of us can take in order to halt this repulsive agreement.

What You Can Do:

One thought on “Stop the RDU Quarry!”