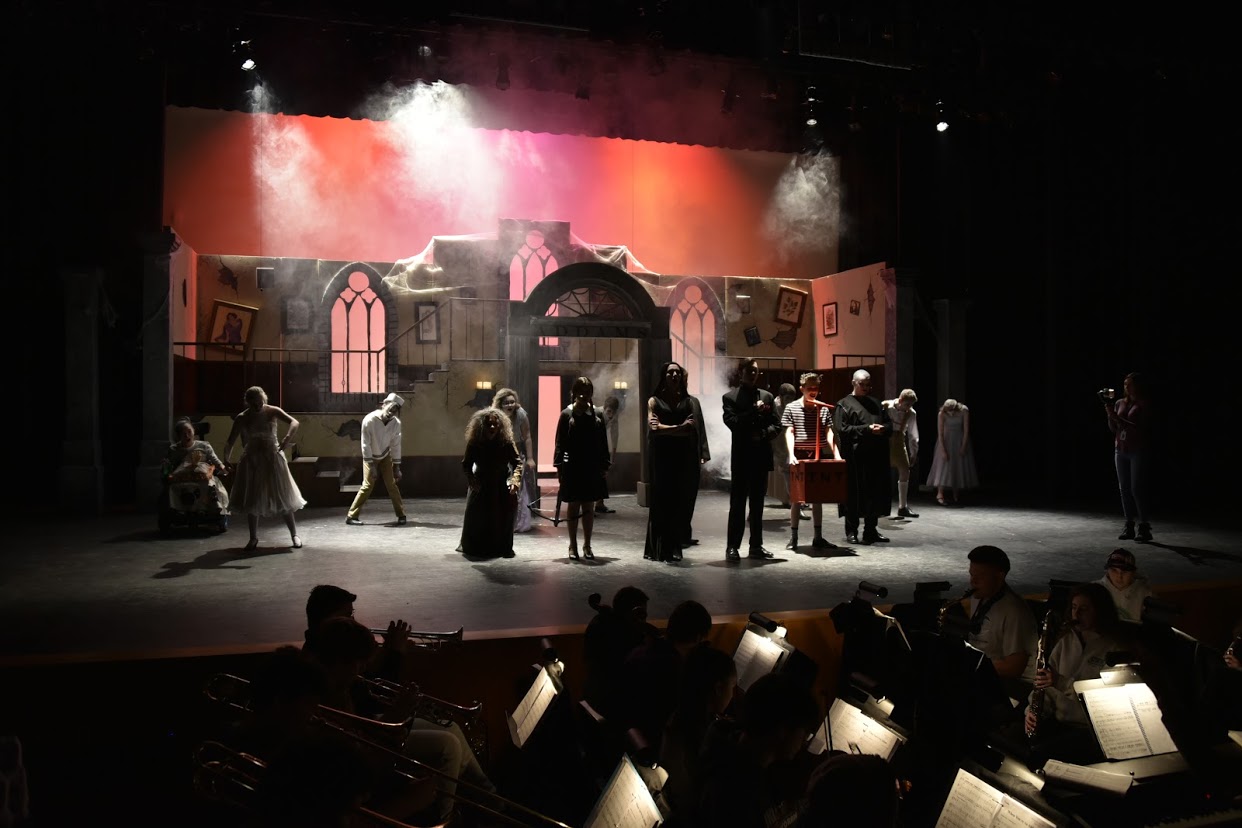 March Madness isn’t just for basketball. If you’re in The Addams Family, March Madness is just now halfway done. One of the busiest weeks of the second semester just ended for most drama kids at Cary High: Tech Week! For those of you that don’t do musicals, Tech Week is the week before the show where technical elements such as lighting and microphones are added gradually, and the cast stays every day after school until around 6:00 pm. This year, tech elements were added day by day, and I, a statue in The Addams Family, am going to take you through this crazy week.

MONDAY: On Monday, we added full lighting. When we were rehearsing previously, we just had full lights on in the auditorium so we could see our wonderful drama teacher, Mrs. McCormick, teaching us choreography and helping us the (many) times we got the choreo wrong. Monday was one of our first full run-throughs of the show with no stops, and we definitely struggled a bit to remember what places to go to after specific songs and what came next in the show. The cast also had the opportunity to run the show in our costumes, which proved to be very helpful to me, considering I tripped on my dress multiple times and ripped the underskirt. Overall, Monday wasn’t too tiring, and it got me excited to run the show for the rest of the week.

TUESDAY: On Tuesday, we added microphones. I can easily say that microphones are one of the most annoying aspects of a show. In what we lovingly refer to as “microphone hell,” our incredible sound people add microphones to all of the leads and featured couples, and we hope and pray that nothing goes wrong. As it turns out, things love to go wrong! We had issues with feedback and microphones going in and out, but our wonderful sound people (shoutout Gabe Crochet and Mr. Cleveland) immediately got to work fixing the issues, and the show was able to run smoothly. Overall, not that tiring of a day—I was even able to get some homework done backstage!

WEDNESDAY: On Wednesday, we added the pit orchestra. The pit consists of band and orchestra members that play the music from the show. I would say that running the show on Wednesday was the most difficult, as we had never run the full show with the pit before. However, they sounded incredible, and the talent and hard work of everyone in the pit was easily seen and shown. Wednesday also brought with it even more microphone problems than the day prior. Microphones continued to go in and out, but the problems were fixed just as fast as they came. Wednesday was also the day that we got one of the fastest transitions of the show fully down (yay!), which leads into what I would consider the funniest and most chaotic 10 minutes in the entire show. Overall, a very tiring day that made me want to collapse but incredibly worth it.

THURSDAY: On Thursday, we added full costumes. This honestly didn’t make that much of an impact since most of the cast had run the show in their costumes already, but it was definitely fun to see the costumes that I hadn’t seen before. Thursday’s run-through was spot on with transitions and hilarious moments that were previously unseen by us, and I had a hard time keeping it together on stage at some points. Overall, it was a quality run-through that made me incredibly excited to add the last technical element on Saturday: hair and makeup.

FRIDAY: Before we can get to the craziness of Tech Saturday, however, Friday must be mentioned. Friday was the day that most of the cast, in my opinion, was drop-dead tired. I found myself exhausted to begin with and exhausted at the end, leading to a long sleep that night. However, Friday’s run-through served to be one of the best that we have had so far! Nothing was added in on Friday, and the energy and desire to run the show well was palpable. Overall, it was another quality run-through that left me ready to drop on my bed and sleep for hours.

SATURDAY: Finally, the most chaotic day of the entire week: Tech Saturday. Tech Saturday is where all elements intertwine, and we are finally able to do a complete run-through. Basically, it’s our first dress rehearsal. Hair and makeup was added on Saturday, leaving the hair of many feeling crunchy with hairspray and baby powder. Makeup was definitely an adventure as well, especially having to cover my arm with white face paint with my non-dominant hand. Running the show was definitely an experience, as the pit, lights, sound, hair, makeup, and costumes all came together for the first time. Saturday was a day filled with little quips from leads in their scenes and people slipping on tiny piles of baby powder left on stage. Many photos were taken on Tech Saturday, and the trailer for the musical, edited by Michael Shorb and filmed by Ms. Glenn, was able to be filmed. Overall, Saturday was a good run-through and left me excited for show week.

Leaving Saturday’s rehearsal, I was struck with the realization that we only have two more rehearsals before we open. Show week is bittersweet, but I can’t wait to showcase all of the hard work that’s gone into The Addams Family. Show dates are March 12th-14th at 7:00pm, and the link to the tickets is down below. We hope that you’ll come see it!
Ticket Link: https://www.showtix4u.com/events/caryhigh