Pictured below, Diego Ortiz (left) and Luis Daniel (right) attend school without and with a mask, respectively. 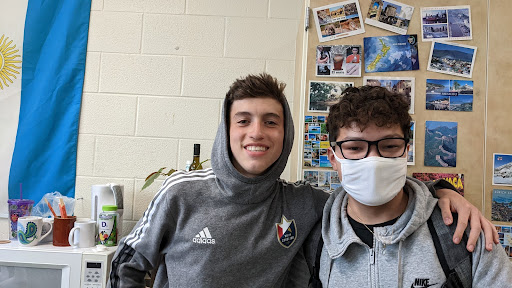 On February 25, Wake County Public Schools decided to lift the COVID-19 Mask Mandate requiring all students and staff to wear face masks in order to protect against and stop the spread of the pandemic. Now, it has been two months since the mandate has been lifted, and The Page interviewed a few students and staff to hear what they had to say about the mandate. Some interviewees still wear masks, while others do not.

Mr. Jessee is the teacher for Speech 1 and is the advisor for the Speech and Debate team at Cary High. When the mask mandate was lifted, he decided to no longer wear a mask, in part due to how much of a factor facial expressions go into subjects such as speech. When asked how he felt, Mr. Jessee said, “I missed the natural human interaction that relates from not wearing masks. But if our safety were compromised again I would definitely be happy to comply with reimposed regulation.” He goes on, stating how he thinks that “… for the students vocal projection and facial expression [it] is very important.” He also mentioned that facial expressions and vocal expression are very important to the point where the Speech and Debate team decided to compete in all of their tournaments virtually as to have the ability to express themselves in the aforementioned ways.

“I wear a mask because I don’t want to get sick and I have relatives that are immunocompromised, and a child that has a vaccine that was deemed ineffective,” says Ms. Richards, teacher for classes such as AP Psychology and AP World History Modern, when asked about why she still wears a mask. She continues by saying, “I just don’t want to be responsible for the death of others, especially my kid.”

The Page also asked some students about their stance on the issue. Mohamed Abdelety, a sophomore at Cary High, decided to continue to wear a mask. He mentioned that,  “coronavirus is still around. It’s not as much [as it was before] but it’s better to be safe than sorry.”

Luis Daniel, a sophomore, decided to still wear a mask, but for a different reason. He states that “I don’t really have a reason for it. I just wake up and put it on”, exclaiming that it has simply become a part of his day and a normal part of his routine.

The Page interviewed a few students who decided to no longer wear face masks as well. When asked why she no longer wears a face mask, Savannah Boyd, a sophomore, stated that, “I’ve just accepted that this [COVID] is part of life now and I think I just want to move on with life as normal.” Aras Bozal, a freshman, says that, “I’m probably not going to get it [COVID-19] anyway. And if I do get Covid, it won’t be a big deal.” Both emphasized that they simply don’t want to worry much about getting the virus, and how there isn’t much likelihood that they will.